Author Update (9-28-15): Author Amy Stewart promises a sequel in the Kopp sisters story due in 2016. Also, movie and/or TV offers in the works. Read more at http://nurph.com/LitChat/chats/2481

Constance Kopp could be just the leading lady Hollywood has been waiting for. She’s independent, resourceful, intelligent, brave, and she won’t back down from any man. While we wait for the inevitable movie adaptation and for the dust to settle over which A-list actress should portray her on the big screen, readers can whet their appetite for Constance’s adventures now in the pages of Girl Waits With Gun, the new novel by Amy Stewart (available Sept. 1 from Houghton Mifflin Harcourt, $27). 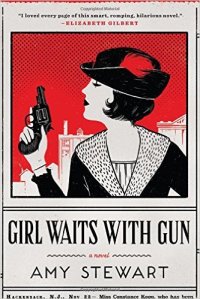 Set in 1914, the novel wastes no time as Constance, along with sisters Norma and Fleurette, are nearly killed in the opening pages in a horrific collision between a motor car and their horse-drawn buggy in Paterson, N.J. Both Constance and Norma escape the mishap with minor scrapes, though Fleurette, who is the youngest of the three at just 16, suffers a badly injured leg.

Making matters worse, the driver of the motor vehicle, silk factory magnate Henry Kaufmann, has no remorse for what’s happened and lays the blame for the wreck on the Kopp sisters. When he tries to drive off, Constance promptly shuts the car door in his face and demands his name so that she can send him the repair bill for the wreckage to their buggy. Right away readers cannot help but cheer for Constance Kopp and want to keep reading.