In the life of every country, at a moment of extreme national disruption, there is a brief period of breakdown, when everything is uncertain. That is the moment to act, to shape events how you want them to go. That is Minute Zero. 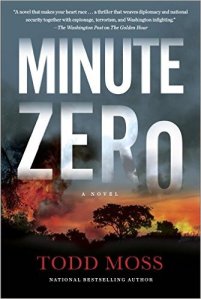 State Department Crisis Manager Judd Ryker is thrown into the midst of just such a scenario in Minute Zero, the new book by Todd Moss (G.P. Putnam’s Sons, $27). Inspired by actual events, the novel highlights the chaos of a national election gone awry in the African country of Zimbabwe. Rudd is tasked with helping steer a political outcome that will benefit the United States, but, unknown to him, he is just a pawn in the political game being played out around him.

The election pits longtime Zimbabwe leader Winston Tinotenda against upstart rebellion leader Gugu Mutonga, and early signs point to a possible victory by Mutonga at the polls. Ryker’s investigation unveils a money trail and secret US support behind the candidates, as well as a scheme to uncover a high-grade uranium mine that could put the weapons-grade material in the wrong hands.

But as the election draws to a close, the country is rocked by a series of events.

After a lengthy detour as a reporter and editor for a daily newspaper telling true stories, now I'm making stuff up as an author and screenwriter.

Posts At A Glance

"First and foremost: write. What makes an author is writing. Write no matter what. If you stop writing, start writing. Keep writing. If you go through a long period without writing, don’t get discouraged, start again. I don’t think it’s true that a “real writer” writes every day. I don’t write everyday and I think most people consider me a real writer. Just write in your own way. Protect your ideas and protect your material. Guard against criticism. If you hear something critical that helps you, take it, seize on it and use it. But if you hear a lot of bad things, don’t pay any attention. Just keep going."
-- Anne Rice
-
“Don’t let ’em convince you to change what you’ve written. A director isn’t a writer. Neither is a producer or a studio exec. You write for a living. You’re the pro. They’re amateurs. Dilettantes at best. Treat them that way. Make them feel that’s what they are.” -- Joe Eszterhas

A place where books and imaginations spring into life

The Future Writers of America

US Review of Books

Professional Reviews for the People

Fun, unusual and forgotten designations on our calendar.

TIME TO REGISTER TO VOTE