Imagine escaping from an abusive relationship with your children cross-country only to see them taken from you by someone else. That’s the nerve-racking nightmare confronting Audra Kinney, the lead character in Haylen Beck’s new novel, Here and Gone. Making matters worse, the people who have taken her daughter include a local Arizona sheriff and his deputy. Any parent, or anyone with a heart for that matter, can only begin to sympathize with Audra’s plight and keep turning the pages to see if the family will be reunited in this harrowing thriller. 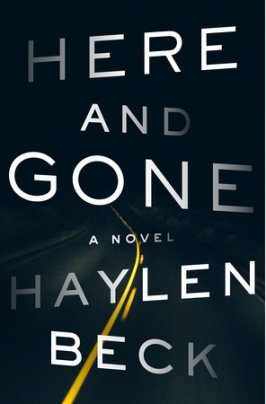 Initially, Sheriff Whiteside stops Kinney on a supposed traffic violation. A search of her vehicle turns up a bag of marijuana in the trunk – which Audra insists he planted – and he takes her into custody. Meanwhile, Whiteside’s deputy, Collins, takes possession of Audra’s children from the scene of the traffic stop, promising to keep them safe. But when Audra asks about them in jail, Whiteside says, “What children?” And Audra’s nightmare suddenly goes from bad to worse.

Beck, who is better known as prizewinning international crime writer Stuart Neville, swiftly unveils an abhorrent plot in which a powerful cabal sells children on the black market to the highest bidder. We can only imagine the winning bidder’s intent once they have the children, which makes the read even more terrifying.

Audra, along with an unexpected ally who lost his children in a similar situation years ago, desperately attempts to learn the truth so that she can be reunited with her children. But will she get to them in time?

Here and Gone thrills from the first page and doesn’t let up until its satisfyingly explosive end. Beck’s prose is taut, wasting no unnecessary words or actions in favor of keeping the plot moving. Each of his characters is finely crafted, from Audra’s helplessness to growing resolve to Sheriff Whiteside’s devious motivations. You won’t be able to put this one down.

Note: I received this book from Blogging for Books in exchange for this review.