Every day I scour the web for interesting articles about writing, reading, and other fascinating stories. I occasionally share those in this space, just because I’m such a cool guy. Today’s roundup consists of two movie franchises with huge fan bases, and no, I’m not talking about Star Wars. Both are fascinating looks at the past, present, and future of characters that have endured no matter the medium. As a bonus, I’ve included an article about a superhero now appearing on your not-so-small home television screen. Enjoy. 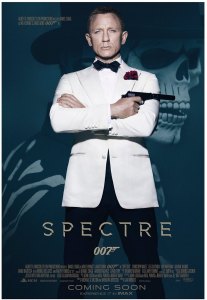 There was an interesting article on Variety this week about several Bond films that never made it to the screen, including one from Alfred Hitchcock. The new James Bond movie Spectre hits theaters this weekend and I couldn’t be more excited. Bond was one of my mom’s favorite movie series. Even though she had every Bond movie on DVD, she’d still watch Bond whenever it came on TBS. I’ll be thinking of her when the lights go down and the Bond theme song cues up. I know she’ll be watching with me in spirit. I recently read Casino Royale by Ian Fleming as a way to psych myself up for this new Bond movie, and I have to say I am suitably psyched up.  Here’s a review of Spectre to help get you excited. As Rich Gold pointed out in his 1962 review of Dr. No, “As a screen hero, James Bond is clearly here to stay. He will win no Oscars but a heck of a lot of enthusiastic followers.” There’s even a new Bond novel out there, Trigger Mortis by Anthony Horowitz, that drags Bond firmly into 2015 with a live-in girlfriend, Pussy Galore, and a gay friend. And, finally, a long lost Bond novel, Colonel Sun by Kingsley Ames in 1968, is finally being reprinted as a paperback in January.

In case you might have been sleeping under a rock and haven’t heard, CBS All-Access will showcase an all-new Star Trek series beginning in January 2017. In a bold move, perfectly fitting for a series that goes where no one has ever gone before, the digital on demand subscription platform makes perfect sense. Rather than airing the show on broadcast TV and praying for a particular set of ratings each week, the show will have an opportunity to thrive online instead. The series will be executive produced by Alex Kurtzman and will introduce new characters seeking new worlds and new civilizations, while exploring dramatic contemporary themes. Believe it or not, there’s actually a campaign to cancel the Star Trek series before it begins. The folks behind the campaign apparently fear, and with good reason based on the latest movies, that CBS will only screw up the franchise even further. I’m excited to hear about the new series and am hopeful of the new stories yet to be told. Let’s boldly go forward. The exciting news for writers, meanwhile, is the return of Star Trek’s Strange New Worlds writing contest. I’m hoping to enter, but so far I’m drawing a blank on what, or rather, whose story to write.

Is anyone watching the new Supergirl TV series? It’s clearly targeted towards teens and young adults, but as a comic book fanboy I’ve watched the first two episodes and will likely watch more. The special effects are a little on the cheesy side, but so far the story has been entertaining. I do hope she doesn’t have to keep contending with former Krypton criminals and Phantom Zone menaces, however. Let’s explore something other than the usual, huh? For those of you wanting to know about Superman’s cousin, bamsmackpow.com has put together A Beginner’s Guide to Supergirl. Check it out.

Superheroes on the small screen are all the rage right now. Gotham, which tells the story of Gotham City Police Detective Jim Gordon and a young, pre-Batman Bruce Wayne, has really ramped up the action and intensity this season. The Flash and Arrow are both going strong over at The CW, and NBC has rebooted Heroes Reborn. I’m even enjoying iZombie.