If you’re looking to spice up your summer reading with thrills and mystery, look no further than these three titles:

A life for government secrets

Information, as Jonas Worth equates it, is “a currency more sought-after than cash.” Worth, a British intelligence worker, knows this firsthand. But he faces a weighty moral dilemma: Can he trade his access to government secrets to the terrorist organization of ISIS, even if it means saving the life of his kidnapped father?

Author James Wolff, who is himself a former British government worker, poses that question for his main character, Jonas, in his gripping debut spy thriller Beside the Syrian Sea ($14.95, Bitter Lemon Press).

At first, Jonas’s own government, along with the Foreign Office and the police, implores him to simply be patient: “It’s a waiting game.” He is told in no uncertain terms that the people holding his father will eventually come under the control of more moderate forces who in turn can be persuaded to release their hostages without paying a ransom, which is against British government policy. 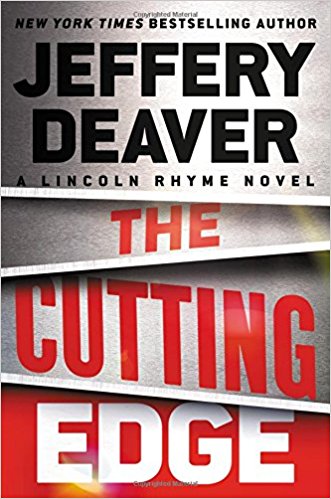 Lincoln Rhyme and Amelia Sachs are back for another head-scratching puzzle in Jeffery Deaver’s newest novel, The Cutting Edge. This one – the fourteenth in the series to feature the intrepid, quadriplegic detective – begins with a shocking triple murder during an apparent holdup in New York City’s diamond district–where diamonds are cut from raw stones into tiny, expensive baubles.

When a witness walks in on the murders in progress and is almost killed before he can get away, the novel becomes a game a cat and mouse as both the murderer and the cops race to find the witness first. As Sachs follows the physical clues, Rhyme, assisted by a team of officers, examines video evidence that can help track the potential witness, who, naturally, doesn’t want to be found by anyone.

Deaver’s prose is straightforward and the action comes fast and furious. Tight chapters keep readers from getting bored.  And there is more to the story than just solving the crime.  The reader will also benefit from a master class full of information about the diamond industry as well as an inside look at the lives of diamond cutters.

The grand master of mystery/pulp fiction and creator of private detective Mike Hammer may have passed away in 2006, but fans marked what would have been his 100thbirthday on March 20 with a new novel. Billed as his final completed, unpublished novel, The Last Stand hits bookstores courtesy of Hard Case Crime.

While it’s not the gritty, in-your-face detective noir Spillane was famous for, and Hammer is absent from its pages, The Last Stand is nonetheless an entertaining adventure.

The novel begins when pilot Joe Gillian’s BT-13A  plane inexplicably loses power during an old-timer’s cross-country junket, forcing him to land in a desert somewhere in the U.S. But it’s the discovery of an unusual glass-like arrowhead of unknown substance and origin that provides the mystery, and impetus, for the remainder of the story. The shard draws the attention of both ruthless businessman Maxie Angelo and a cadre of federal agents, all of whom want the shard and any similar artifacts at any cost.

Combined with his trademark sharp dialogue and simple prose style, he keeps the tale moving at an entertaining clip.