Long road trips tend to lull many people to sleep, but there’s no time for sleep for trucker Ben Jones in James Anderson’s newest novel, Lullaby Road ($26, Crown). If you’re a reader along for the ride, you might find yourself staying up late, too. 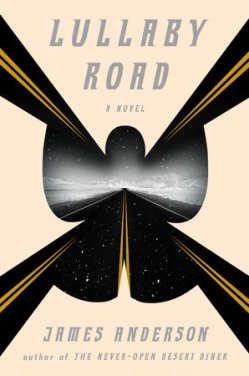 From the moment he puts his truck into first gear, Jones is caught up in one conundrum after another, proving that life is like a road—full of twists and turns, stops and starts, peaks and valleys, and a slew of unusual characters. Jones and several characters—including motorcycle-loving hermit Walt and wooden cross-carrying preacher John—may be familiar to readers of Anderson’s first novel, The Never Open Desert Diner. But there are plenty of new faces to get to know, too.

Set along desolate Highway 117 in Utah,  Jones spends his days delivering anything and everything the big shipping companies send his way. But Jones’s latest pickup is his most bizarre yet: a young child and her protective guard dog, left at a fueling service station for him with a cryptic note: “Please, Ben. Bad trouble. My son. Take him today. His name is Juan.”

Jones could easily turn the child over to the police, but his complex code of ethics prevents his doing so, resulting in even more “bad trouble.” Add to the mix reports of a crazed driver looking to run others off the road, a hit-and-run that leaves John the preacher clinging to life, a convenience store owner ready to blow away anyone who attempts to rob him again, and a former flame who wants Jones to take care of her own daughter for the day, and Jones is left longing for the lonely, desperate life of the road he used to know all too well.

If that seems like a jumbled mess, isn’t that how life really is? Admit it, most events aren’t sorted out one at a time, but are heaped one upon the other as they each run their course. Somehow, Anderson manages to juggle all the plot threads and characters with ease as he keeps the lens sharply focused through Jones’s point of view.

Many readers may prefer a more focused, linear tale, but it’s easy to get swept away by Anderson’s colorful prose, evocative setting, and unusual situations.

Note: I received this book from Blogging for Books for this review.