Whether you are looking for frontier justice or international suspense, you’ll find a book for you among my latest book reviews.

Only Killers and Thieves 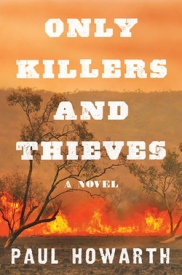 The story of a frontier family’s murder by a tribe of native peoples and the ensuing quest for vengeance has been written before. It’s a staple of many Western novels. What sets Only Killers and Thieves (Harper, $26.99) apart is its locale: not the late 19th-century American West but the untamed wilderness of the Australian outback.

The novel begins innocently enough, with teen brothers Billy and Tommy McBride on a hunting expedition…but when the boys discover their parents slain and their young sister, Mary, barely clinging to life, they must swallow their father’s pride and seek help from his nemesis, a deeply racist land baron called John Sullivan.

Only Killers and Thieves is brutally violent and shocking, from its depiction of racial bias to its savage realism, but at its heart, it is a coming-of-age novel. 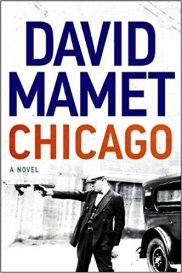 David Mamet hasn’t published a novel in 20 years, but he makes up for it in every way with Chicago (Custom House, $26.99). Set during the height of Prohibition, the novel follows intrepid reporter Mike Hodge, whose nose for news only serves to get him into trouble. While other reporters at the Chicago Tribune make an effort to stay under the radar of City Hall, mobster Al Capone and even their own publisher, Mike constantly looks for rocks to turn over and skeletons to expose.

Movie buffs will immediately recall Mamet’s screenplay for The Untouchables about the legendary showdown between FBI Agent Eliot Ness and Capone. Whereas the movie was a tense, action-packed shoot’em-up, Chicago is a more methodical whodunit, though fraught with plenty of tense peril of its own.

Every page is layered with sharply drawn, often biting dialogue. Some of the conversations are so thick you may have to read them twice to catch everything, but they’re so good you won’t mind one bit. 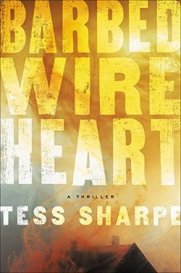 In YA author Tess Sharpe’s first novel for adults, Barbed Wire Heart ($36, Grand Central), Harley is the daughter of Duke McKenna, one of the meanest, most ruthless crime kingpins in the backwoods of North California where guns, drugs and violence are a way of life. Death awaits anyone who crosses him or threatens his daughter. But Duke knows he can’t be there to protect her all the time, so he trains her the only way he knows how. Every moment of her life is punctuated with brutal lessons in how to survive, how to thrive and, if necessary, how to kill. These are skills Harley calls upon again and again as she learns her role in the family’s meth-making business.

Barbed Wire Heart is a gritty, bloody, in-your-face affair and definitely not for the faint of heart. Her heroine is fiercely independent, morally complex and desperate to forge her own path to freedom—no matter the cost. She is, after all, a McKenna.

If you’re looking for a good book to curl up with and lull you to sleep, don’t read Jonathan Moore’s The Night Market—it’ll keep you awake all night.

Moore’s latest novel is a noirish, moody mystery shrouded with conspiracies that would make any “X-Files” fan rejoice. The story begins routinely enough with its main protagonist, homicide investigator Ross Carver and his partner, Jenner, being dispatched to the scene of an apparent murder in an upscale San Francisco neighborhood. But things quickly take an unexpected and somewhat gory turn when the rapidly deteriorating body is examined. As Carver and Jenner begin making their initial assessment, they’re suddenly surrounded by federal agents in full hazmat suits and are whisked away from the crime scene.

When Carver awakens three days later in his apartment, he has no knowledge of the past three days’ events, including the bizarre murder scene.

Moore expertly paints a bleak cityscape for our hero, and in this world, no one can be trusted, and dangerous secrets are just waiting to be uncovered.

Jon Jefferson’s newest novel, Wave of Terror (Thomas & Mercer, $15.95)  explores a terrorist plot on a scale that would put 9/11 to shame. Jefferson is best known as half the mystery-writing team of Jefferson Bass, of The Body Farm fame, but this book is not about the discovery of a badly decomposing body and the resulting forensics investigation. Instead, Jefferson has crafted a compelling, action-packed spy thriller that’s part James Bond and part big-budget disaster movie.

Events begin innocently enough as astronomer Megan O’Malley, a “rising star of the Johns Hopkins astronomy department,” takes advantage of a three-day sabbatical to use the Isaac Newton Telescope on Spain’s La Palma Island (part of the Canary Islands off the northwest coast of Africa) in her search for Planet Nine. … But each time O’Malley aligns the telescope to conduct her search of the heavens, it inexplicably shifts, ruining her night of stargazing.

O’Malley’s dogged investigations ultimately reveal a doomsday scenario—deliberate explosions along a major fault line through La Palma that could result in a major earthquake, causing a massive tsunami. FBI Special Agent Chip Dawtry … is handed O’Malley’s report with its wild theory about the terrorist risk, and he rushes to La Palma to investigate. Hoping to prevent the unthinkable from happening, the two protagonists race to determine who has been blasting on La Palma even as the culprits behind the plot close in on them.

Dawtry and O’Malley are a likable, fun pair with a clear passion for justice.

Read the full review at Chapter 16.

1 thought on “From frontier justice to international terror, put these on your TBR list”