Many people can still recall the old anti-drug commercials depicting an egg sizzling in a frying pan with the message, “This is your brain on drugs.” The antidote to that is a “brain on literature,” says award-winning short story author George Saunders.

Saunders shared the analogy at Parnassus Books in Nashville this past week as part of his national book tour for his debut novel Lincoln in the Bardo.

“Having written this book for four years, I had this beautiful experience, as anybody who writes–or reads–knows, which is, on literature your mind lights up 380 percent,” he said. “You know, a comma can put you in tears, the right semicolon or a string of adjectives can kill you. So my thing is, our thing is, the brain on literature is maybe the best form of the human mind, except maybe the brain on love, but they’re not that different.”

By comparison, he said he found his mind shrinking when having to cover a Trump rally this past summer.

“So I’m on social media, I’m watching CNN until I’m about to throw up, and all the things it involved me doing, and what happened? My mind shrunk. I got a little meaner, I got more combative, I wanted quick relief when someone would email me with his stupid right-wing beliefs, you know, I shrunk,” he told the standing-room only crowd of book lovers and fans. “I think that’s appropriate, but it was weird to notice.”

Because, when “you take the highest way that the mind can work and you marginalize it and vaguely mock it, and you don’t compensate it, what happens? Oh surprise, the culture’s language gets stupid,” he said. “So I think we double down on art.” 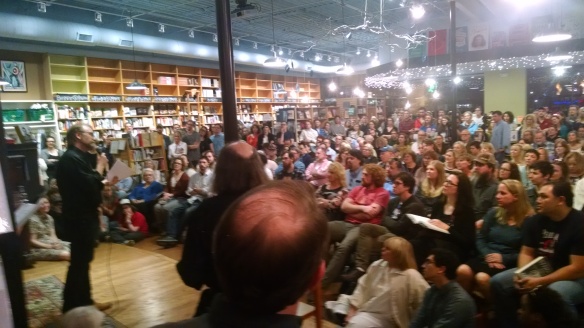 Author George Saunders, left, shares stories about his new novel, Lincoln in the Bardo, with a standing-room only crowd at Parnassus Books in Nashville.

Saunders on his writing process:

My process is, it just happens. For me to write stuff that has any energy, I have to try not to plan it out at all. … I’m just trying to make the language livelier…I often imagine there’s a meter in my head. Over here there’s a P for positive and an N for negative. As you are writing, it’s just kind of looking to see what the prose is doing to the needle. When it’s in the positive, you’re good. When it drops…instead of saying, I failed, you have to say to the story, “I noticed the needle dropped..what can I do for you?” If you bear down on it, it’ll kind of say, “I’m bored.” If the story is pushing back at you, it’s just saying I want to be a bigger story, if you don’t mind.

A work of fiction is kind of this black box you walk into and something’s supposed to happen. You don’t really know what, but it’s supposed to be intense. Maybe you don’t even know what it is as the writer, it shouldn’t be trivial. It should actually be a moment. If you come out of a good book, you’re kind of just dazed, and that’s the moment. … I found out a long time ago the model for fiction is it’s like a wind up toy. You wind it up, put it on the floor, and it’ll go under the couch as fast as possible.