Hunters in the Dark by Lawrence Osborne has been praised for its Hitchcockian twists and suspense, but it also boasts Shakespearean themes of mistaken identities, treachery, and deceit. Either way, it all adds up to one hell of a good read. 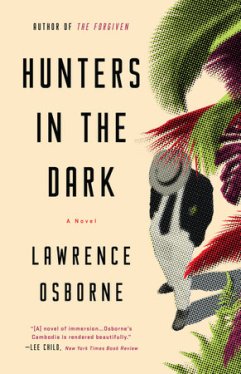 The novel opens on Robert Grieve, a small-town teacher from England on holiday in Cambodia, as wrestles with his life. Even an unexpected windfall of money from an evening of gambling can’t buy him happiness and, instead, leads to even larger complications.

Grieve is quickly targeted by a deceitful American, a hustler taxi driver, and a corrupt police officer. The American, Simon Beauchamp, drugs Grieve and, figuratively, sends him down river without a paddle while stealing his money and his identity.

Grieve finds himself in the city of Phnom Penh, where he could easily go to the embassy and get a new passport, but instead decides to forge a new life for himself, using the American’s name.

While Grieve, now Beauchamp, begins his new life teaching English to the daughter of a Chinese doctor, and slowly falling in love with her, the real Simon’s illegal deeds catch up with him. Cambodian police investigator Davuth absconds with Simon’s ill-gained cash and, apparently believing there is more where that came from, he traces Robert to Phnom Penh. Unknown to him, the aforementioned taxi driver, Ouska, is also on the money trail, resulting in a trilling game of cat and mouse.

The plot alone is worth reading and enjoying, but Osborne elevates the novel with his stylish, smooth prose, creating an unforgettable mood and sense of place.

I received this book from Blogging for Books in exchange for this review.