So, by now you’ve probably heard about this so-called rash of clown sightings in some states. The Tennessee Highway Patrol even went so far as to post a warning to beware of persons dressed as clowns after reports of clowns threatening children in East Tennessee. According to a report on WSMV, the THP warns these men could be predators. If you happen to come across any related cases call 911 or *847.

Better yet, you should prepare to defend yourself. Author Chuck Sambuchino tells you how in his book, When Clowns Attack, which I reviewed for Blogging for Books last year. Here’s the review in case you missed it: 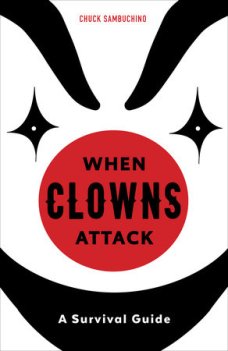 Just in time for Halloween comes an indispensable survival guide, When Clowns Attack (Ten Speed Press,  $14.99). The slim hardcover book by Writer’s Digest advice expert Chuck Sambuchino may sound silly, but it treats its topic as deadly serious. (Hey, clowns might look like they are having a lot of fun, but that’s part of their way of luring you in for one of their patented bozo attacks!)

Following on the heels of the popular Zombie Survival Guide: Recorded Attacks by Max Brooks and his own How to Survive a Garden Gnome Attack, Sambuchino exposes a far more credible threat and ways to deal with it in his killer clown opus. Zombies may be scary, but clowns are real, OK?

Clowns, he explains, are simply not what they appear to be. You never know their real names, they gallivant about in size 22 shoes, purposefully wear oversized pants in which they can hide all manner of weapons, seem impervious to pain, and have a fetish for children, who they routinely kidnap and indoctrinate into their colorful lifestyle.

Sambuchino speaks from personal experience: both his grandfathers suffered at the hands of these deranged jokers years ago, he tells us in his introduction. As a result, Sambuchino founded the anti-clown group Red Nose Alert and its mission to dutifully arms readers for every  eventuality when confronting crazed clowns, explaining what to look for (from their facepaint to their clothes), how to outrun a clown (throw imaginary objects at them to distract them!), and how to defend yourself in an attack (make a fart sound and they will double over in hysteria) .

The book is full of colorful photographs of the felonious jokesters, though many are stock images. It would have been more exciting to see photos of such crazed clowns as Pennywise from Stephen King’s It, Shaggy 2 Dope and Violent J from Insane Clown Posse, or Twisty the Clown from American Horror Story: Freak Show, but copyrights would probably have been difficult to obtain.

Still, the book is a fun diversion overall and, who knows, could prove useful in the event of a clown attack. At the very least, you could smack the book over the head of a clown. So there’s that.

Note: I received this book from Blogging for Books in exchange for this review.

1 thought on “Writer offers survival guide for When Clowns Attack”