I’m apparently not the comic book fan boy geek I used to be.

Otherwise, I should have loved Ant-Man, the latest Marvel super-hero opus gracing your local Cineplex. But, for all of its efforts, I was bored, annoyed, and just plain uninspired by the film.

Oddly, it’s getting pretty decent reviews from most of the entertainment media and critics. Not the incredible rave reviews that Guardians of the Galaxy fetched last summer, but plenty of kudos nonetheless. A number of critics have stated the film is fun and features a terrific third act.

After watching the first two acts, it desperately needed something to save it. I can’t speak to whether the third act did the trick or not, though, because after 90 minutes of the dreck that is Ant-Man I walked out. Mind you, I don’t normally walk out on movies, so that says a lot right there.

For starters, Ant-Man is already a hero you can’t take seriously. Even Saturday Night Live once lampooned the character in a skit featuring Garrett Morris as the diminutive hero at a gathering of heroes. When asked about his power, he replies: “I shrink myself down to the size of an ant while retaining my full human strength.” To which The Flash (Dan Ackroyd) replies: “Oooh, that’s really impressive. Size of an ant with human strength. You must be able to clean house on those other ants, huh? Hey, Hulk, check this guy out. .. He’s got the strength of a human!” 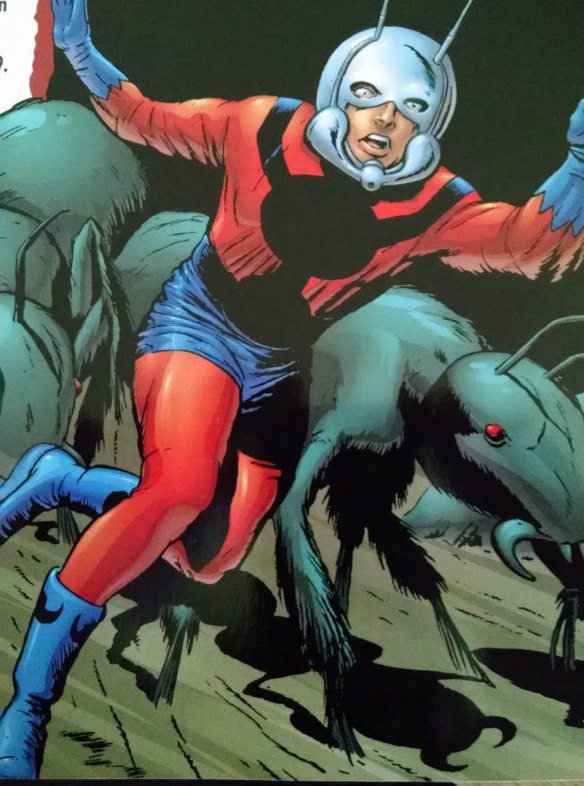 So, to be fair, I didn’t give the movie much of a chance right out of the gate. The previews had left me less than excited and Ant-Man was never one of my favorite comic book heroes. How could he be when there are heroes like Captain America, Iron Man, and Thor around?

Maybe I shouldn’t have gone to the movie in the mood I was in. Did I mention it was my birthday and I was feeling old? But, I was bored at home alone and I wanted to do something to mark my special day. And, it wasn’t like there were a lot of alternatives at the theater to see. Well, there was Minions 2…

In any case, you’re probably wondering, what’s wrong with Ant-Man? Why didn’t you like it?

I think, in part it has to do with the mood or tone of the movie. I couldn’t tell if it wanted its audience to take it, and its little hero, seriously, or yuck it up for laughs. I mean, who is the target audience of this film? If it’s comic book fan boys, OK, parts of the movie should have satisfied them. References to the Wasp, the fight (if you can call it that) with the Falcon, and its continuity within the Marvel world of movies were all points to savor. But, on the other hand, it was chockfull of silliness you’d expect from a Disney film. (Oh, wait, Disney owns Marvel now, right?). Paul Rudd, as one critic put it, is “laughably unheroic” in the role.

The film also plays all the right notes when considering its story structure, following the hero’s journey/character arc from reluctant no-good conman to redeemable superman by the end. There are parallels of father-daughter subplots between Hank Pym (Michael Douglas) and his daughter and between Scott Lang (Rudd) and his daughter. There’s the slighted pupil turned evil bad guy against his mentor (Pym).

But for all of that, the film seemed flat and boring. All the plot points seemed to come about more by rote (as in, story structure says such and such an event must happen next) than through the organic growth of the characters and plot. The result was a very dry, predictable romp for the first 90 minutes of the movie. I kept waiting for the movie to surprise me, and it just didn’t do that.

Paul Rudd as Scott Lang (Ant-Man): My days of breaking in places and stealing stuff are over. What do you want me to do?

Michael Douglas as Hank Pym: I want you to break into a place and steal some stuff.

What other critics are saying:

Update (Aug. 12): I just came across this trailer from Werner Herzog on his interpretation of Ant-Man, in which Scott Lang is trapped in the insect world and experiences the grim brutality of nature. This could have been a cool take on the Ant-Man movie. No silly super-villains. Man against nature. Much more interesting.

So, have you seen Ant-Man? What did you think? Share your thoughts in the comments section below.