Just when you think you’ve got a handle on events in What You Left Behind, the new novel by Samantha Hayes, she throws you a curve. That’s normally a good thing in a mystery-suspense novel. The twists and turns should be enough to keep readers glued to the pages, but in this case it backfires. 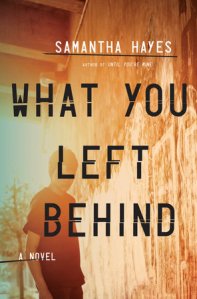 The book ($25, Crown Publishers) starts on a thrilling note as a pair of thieves out for a midnight joyride on a stolen motorcycle lose control and careen into a tree. The female passenger, who narrates the chapter but is never identified, manages to slip away into the night. The male rider is killed. A suicide note found in his belongings, the fact that he wasn’t wearing a helmet, and the lack of skid marks at the scene, lead police to conclude that the wreck was a suicide.

Rather than follow the story of the rider who walked away, and why she didn’t come forward, the novel takes the first of many turns. Instead, we are introduced to detective inspector Lorraine Fisher and her daughter Stella as they spend their vacation visiting with Lorraine’s sister, Jo, in the rural village of Radcote. After a second apparent suicide, Jo and others in the community worry that the death may be another in a spate of suicides of its young people, similar to one that occurred there two years ago. Lorraine eventually begins to suspect otherwise and begins a plodding investigation that really doesn’t go anywhere. She pesters the local police, particularly a former associate she despises, to reopen the investigation.

But even this plotline gets shuffled to the background. Hayes begins another tangent involving Freddie, the depressed teenage son of Jo, who is the victim of cyber bullying. Freddie keeps it all to himself and eventually runs off with a stolen laptop. The laptop contains compromising photos of a pair of locals. Freddie witnesses the murder of another teenager, who, you guessed it, police determine died as a result of a suicide. Lorraine thinks otherwise and her investigation is back on again.

Meanwhile, there’s an autistic man, Gil, in town who sometimes jumps to the fore of the story by narrating several chapters. The reader is led to suspect him of being behind the rash of foul deeds in another red herring from Hayes. Gil even holds Freddie against his will in the latter stages of the book. I won’t give everything away, but Freddie’s life is put on the line in an exciting series of chapters near the end, leading to the eventual truth behind things. Or, so we think, until the epilogue where Hayes adds one final twist.

It wouldn’t be a mystery without a false lead or two and several twists, so in this arena Hayes succeeds. Where she goes astray is in maintaining a constant thread tying everything together. On several occasions it seemed like certain plotlines were simply forgotten for long stretches of time. Lorraine’s so-called investigation pales in interest to Freddie’s story, but Lorraine is supposed to be our protagonist of the tale. By the time everything is tied together at the end, it seemed rushed and somewhat contrived.

And, what’s more, one of the most fascinating plot elements – the cyberbullying of Freddie – is completely ignored. It has nothing to do with anything. I don’t know if that’s a red herring or just a blatant mistake. In either case, I was dissatisfied with the outcome of that plot element and its relation to the rest of the book, especially considering how much time was devoted to the cyberbullying.

Hayes demonstrates she can write with power and authority. The scenes where Freddie’s life hangs in the balance – literally – are top-notch. Unfortunately, the many plotlines, subplots and rabbit trails in the rest of the book complicate and muddle an otherwise entertaining read. Sometimes, simple is better.

I received this book for review from Blogging for Books.

1 thought on “Review: What You Left Behind sometimes thrills, sometimes frustrates”