“Damn good writing is damn good writing no matter who wrote it, and the attention and paycheck it earns should be gender-blind,” says author Robert Mangeot, the male president of the Middle Tennessee Chapter of Sisters in Crime.

Like other male members of the group – of which there are a few – he’s known as a Mister Sister. As such, he wholeheartedly embraces the group’s mission to promote equitable treatment and fair pay for women authors, both at the local chapter level and on a national scale. “I’ve worked hard for diversity and equity in my corporate work. It only makes sense to do the same in my writing life,” he explains.

The Nashville-based author has had work appear in Mystery Writers of America Presents Ice Cold, Bouchercon’s Murder Under the Oaks, and Alfred Hitchcock Mystery Magazine, among other outlets. His stories have won writing contests run by the Chattanooga Writers’ Guild, On the Premises, and Rocky Mountain Fiction Writers.

“I badly needed a community of more experienced crime writers to help me connect and grow,” and  Sisters in Crime (SinC) filled that niche, he said.

Mangeot shared his thoughts about his personal journey as a writer, the importance of finding a tribe of like-minded writers regardless of gender, and his goals for the group. 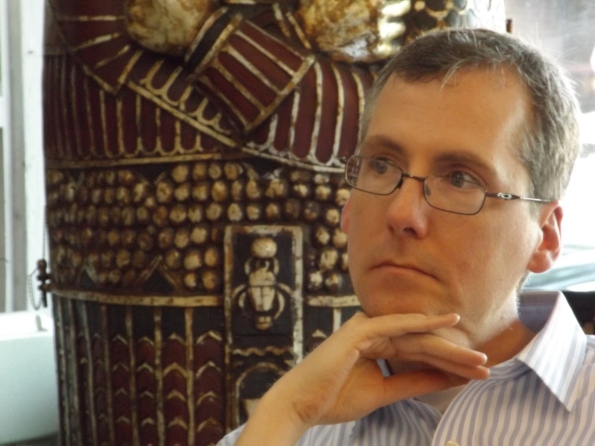 Did you have any reservations about joining a group primarily for and about women writers?

I joined back in 2012. … I’d met enough SinC members to know they were about the same things I am: inclusivity, growth as writers, and love of the written word. It was clear that Mister Sisters are part of the group’s fabric. There are a fair few of us. Becoming an officer was another matter. Two years ago (former chapter president and author) Beth (Jaden) Terrell asked me to consider replacing our chapter VP who was stepping down. I totally balked. “I’m a guy,” I said, but she explained how our chapter has had Mister Sisters serve as officers before, some of them in foundational ways. I still felt like the role should go to a woman and, had one volunteered, I would have gladly served in other ways. I would now, too.

Were you worried about how the mostly female-oriented group would feel about being led by a male?

It’s not like I’m a stranger. Being VP for a couple years now has given our chapter a chance to get comfortable with me and the strengths and quiet energy I hope to bring to the role. Chester Campbell was our chapter president for many years. In fact, in July we honored his great work building much of our chapter’s foundation. That makes my transition easier, in the sense a guy prez has been done before, and to good results. On the other hand, between his and Beth’s legacies, that also means I’ve got big shoes to fill.

The national group recently broadened its mission statement in its Report for Change on diversity, equity, and inclusion in the publishing landscape. Where do you think the group mission stands now?

In thirty years, SinC has grown from a Bouchercon huddle to an international force for progress in publishing. It’s become a thriving biosphere of giving people and diverse chapters. I’m really looking forward to connecting with our national resources and other chapter leads and figuring what ideas I can (ahem) steal. Leveling the playing field for women authors remains important and unfinished work. That will always be intrinsic to the mission, but SinC has also broadened into teaching great crime writing no matter who’s writing or reading it. Over 3,600 writers have joined us for a reason.

As chapter president, how will you advocate on behalf of women writers and more diverse writers?

The best thing I can do for any talented writer is to put them in front of readers. Last year we tried our first Author Showcase event, where a panel of our members held forth and had some Q&A with readers. I’d like to do more stuff like that and make them open to more of our members. We’re thinking about chapter publications like anthologies and author samplers. How much of anything is the tricky part. We’re a small chapter, and that makes any ask on budget and member spare time a precious request. Success means focusing on membership value for our authors. That’ll bring in more writers, and we can put them in front of more readers. This is a process. Whatever is working, we’ll do more of it.

What do you hope to accomplish in your role as chapter president?

I have a threshold test for challenges encountered: Leave them better than when they were entrusted to me. Hopefully a lot better. This won’t be easy with SinC Middle Tennessee, because we’re a terrific group with a growing set of traditions. I’d like us to bump up our member count. I don’t mean growth for growth’s sake. But a smallish chapter only has so many active members, and we need active members if we’re going to do things like showcases, craft workshops or even anthologies. New members matter beyond the headcount math: they’re new friends, our joy and our fuel, our support network sometimes, the folks who will continue to build that community long after I’m out to pasture.

“This is an organization with a huge heart, a lot of big brains, and all of it aimed at growing the craft of our members.”

Why is now a good time, regardless of gender, for someone to join SinC or one of its many chapters?

SinC is focusing on how it can raise the game for crime writing. In the last few years, they’ve expanded their teaching offerings, and the support and publication opportunities its Guppies program gives new writers is simply amazing. This is an organization with a huge heart, a lot of big brains, and all of it aimed at growing the craft of our members.

SinC announced last year it would be focusing on and celebrating the short story. You have had success as a short story author. What advice do you have regarding short story writing for aspiring writers?

Read a lot of them. Find which themes and voices speak to you, and read a lot more of those. It doesn’t matter what genre, so long as they sing to you. Inspire you. Stories are their own animal, and it takes putting in the reading time to grasp what makes them powerful and free. It takes more time still to harness that onto the page.

What has being in this group meant to you on a personal and professional level?

I’m a Louisville boy who twenty years ago found a new home in Tennessee. I was born telling stories, but it’s only been in the last few years I’ve pursued writing them down with much seriousness. Being around accomplished writers has helped me see myself as a writer, not just a guy glued to his laptop. It’s been a needed confidence boost across all parts of my life. Lots of giving and talented writers dedicate a chunk of precious time to SinC. It’s rewarding to get to meet such folks, learn from what they’re doing in their work. And in organizing and working at events like the Southern Festival (of Books, held each fall in Nashville), I get a glimpse of publishing from lots of perspectives, not least what it takes to be an entertaining and successful author. From time to time you’ll catch me talking about craft or moderating panels. Talking fiction can be so much more fun than the process grind of actual fiction.