If you’re a writer or a fan of mystery novels in the Southeast, chances are you already know Jaden Terrell. Terrell has been an integral force behind the Killer Nashville Writers Conference along with founder Clay Stafford since 2006, has served as president of the Middle Tennessee Chapter of Sisters in Crime, and is the regional president of Mystery Writers of America. But beyond that, Terrell is a Shamus Award finalist and author of the Jared McKean private eye series. The fourth book in the series – A Taste of Blood and Ashes – was published late last year, and follows McKean’s investigation into a suspicious barn fire. Chemicals used in the soring of Tennessee walking horses – a painful method used to produce the exaggerated gait in the animals – are found at the scene. I recently sat down with Terrell to talk about the inspiration for the book, her involvement with the writing community, and more.

What was the inspiration for this novel?

Jaden Terrell: I had in my mind for many years to write about the Tennessee walking horse soring controversy. Way before Jared was ever conceived I wanted to write about this issue, but I didn’t have the story to hang it on. When I came up with Jared and this whole PI series, I realized he was a perfect fit for this story to happen to because he’s so involved with horses. 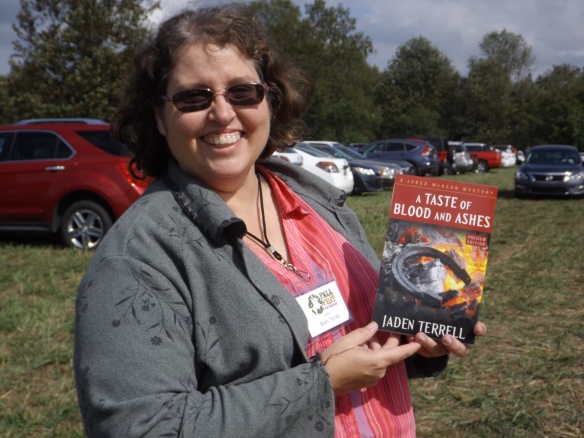 JT: I didn’t figure I could have that in every book. In Book 1 (Racing the Devil), he’s framed for murder. Book 2 (A Cup Full of Murder), his nephew is first a suspect, then a target. And in Book 3 (River of Glass) is where he meets his half-sister he never knew existed and her daughter’s been taken by traffickers. So it was kind of straining the credibility for this family to keep having these issues, so I thought I needed at least one where he just takes a case. This case is one that’s particularly important to him because it involves horses. It begins where he’s investigating a barn fire. The insurance company is sort of hoping the couple that owned the fire set the fire so they don’t have to pay. The flashpoint, or point of origin for the fire, is chemicals in the tack room that are used for soring. But the couple is notably anti-soring, so the question is, have they been lying all this time or have they been set up? And then they find human remains amid the fire, so the plot thickens. So the personal connection is the horses for him, and then the couple because they are definitely underdogs and need his help.

Jared is a recurring character, but this is a standalone book, right?

JT: They all stand alone. Sometimes there are references to the previous book, but you can pick up the book and understand the story anywhere in the series. 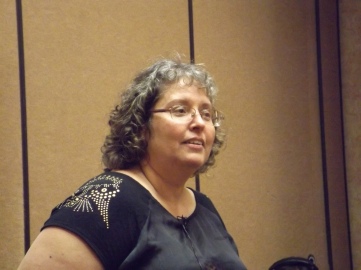 Beth Terrell, who writes as Jaden Terrell, leads a workshop at the Killer Nashville Writers Conference in 2016.

Are you creating an overall character arc for Jared?

JT: He goes through a lot. He does learn things from book to book. But you can’t have a dramatic reversal in a series of  books or they’d be unrecognizable. His relationship with his family continues to grow and they come to a mutual respect, learning about each other. The next book takes place in Alaska — I have 10 books in the series in mind.  Alaska has always been my idea for Book 5 and comes back to the family drama.

Did you have to do a lot of research for this one?

JT: I did. I don’t show horses and I’ve never shown. I’m not actually really much of a rider, I just really like horses. The two horses I have can’t be ridden, so I feed them, give them treats and massages. I went to a class in Virginia and got certification in horse massage. Soring is difficult to research because people don’t want to talk about it. They’re afraid. Several years ago I talked to a trainer who had left the walking horse industry because of the soring and I asked if he would talk about it, and he said, “No, they’ll kill me and they’ll kill you too.” But, I said, it’s fiction, and she said that doesn’t matter to them. I said I don’t even have to put your name in the book and she said they’d find out. For years I thought she was really overreacting. But when I got the review copies, I went to the tack store and gave it to one of the guys there and he said, “Oh darling, I hope you’ll be all right.”

There is certainly an undercurrent of fear about it. I could never really find any real proof of that. The Humane Society’s stance is the horse will never learn the big lick if they’re not sored because it’s a response to pain, but then there’s another school of thought that anything a horse can do it can be taught to do. They do feel like they love the horses, but it doesn’t cross their minds that this is a horrible thing to do to a creature, that this is just how you do it.

Tell me  about your evolution as a writer.

JT: When I was really little, before I could write, I would draw stories. My great aunt and I would cut out pictures of people from catalogs and put them in families and act out stories with them. All my life I wanted to write stories and be a teacher. I very foolishly thought I could do both at the same time and I could not. I was really plagued by the editing syndrome. I couldn’t go on to paragraph two or page two until it was exactly the way I wanted it. I taught for 12 years in a comprehensive development (special education) classroom. I took some time off and wrote a big epic fantasy.

I then entered the Minotaur First Detective contest and got a really nice letter back from the judge and that really encouraged me to keep going. I found an agent (thanks to a recommendation from Nashville author and fellow Middle Tennessee Sisters in Crime member Chester Campbell). The agent was so excited and just loved the book, and then he just vanished. It turned out he died, but nobody told us. We had to figure it out on our own. I found another agent through a conference and he sent the book everywhere. People kept saying we love this, but we don’t want it. Something was wrong with it and I didn’t know what it was. Eventually, someone said it didn’t have enough twists and turns. I said I can fix that. They said they didn’t want me to, they wanted me to write another book. So I wrote book two. It went to the very top level with the publisher and they ultimately refused it because they had just signed one that had the same thing.

So I went back to the first book and realized why they didn’t take it. There was no plot. They loved the characters, but there was something about the story that wasn’t working. I completely reworked it, did an index card for each chapter, color coded it by character and plot. I had this lovely stack of multi-colored cards. I had to distill it down.  I wanted to keep the character parts they liked, but prop up the plot. And it was nominated for a Shamus Award. 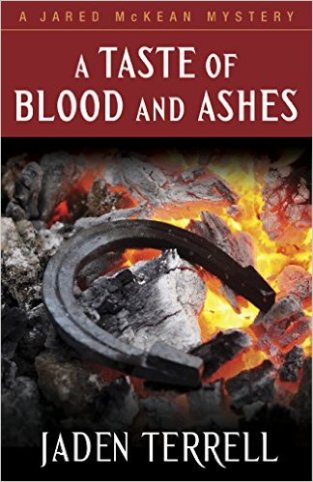 After all that trial and error, the current book went smooth as anything right?

JT: (laughter) They all have their own challenges. The second book was hard in its own way because it was a lot more complex than the first one. The third one went better and quicker, but it was still mushy and I had to go back and prop it up a lot.

Most writers tend to write lead characters who are the same gender. Why did you choose to write about a male protagonist?

JT: Guys get kind of a rough rap sometimes, but the world is full of nice guys and they’re smart. I was watching Saving Private Ryan and the guys keep getting out of the boat and the water’s filled with blood. That’s what we ask our guys to do, these hard, horrible things and then come home and be good husbands and good fathers and good friends. That was the guy I wanted to write about — the guy who would move your furniture for you three years after you break up because you’re still friends.

I tried to write a feisty little female detective but it just wasn’t working. She was a bad V.I. Warshawski knockoff and she was a real bitch. I didn’t like her. I kept seeing this guy leaning against this fence in a leather bomber jacket saying, “I’m your guy.” I said, “No, you’re not,” and he’d just say, “OK, whenever you’re ready.”

So is Jared your ultimate fantasy guy, then?

JT: No. I’m already married to the perfect man. Jared’s probably an iconic kind of guy, but he’s flawed, he’s not perfect by any means. I think that’s what makes him so likable. He has noble ideas and wants to protect people and wants to help. He knows when he does something pretty bad and he has the good grace to feel bad about it. There’s a point in Book 4 where he says something unkind, and even though it’s probably justified, he realizes it diminishes him, just as it always does when you do something cruel.

You’re involved in so much. Sisters in Crime, Killer Nashville, Mystery Writers of America…

JT: I’m a big believer in promotion through service, whether I sell books or not. I did a very tiny bit with Killer Nashville in 2006, then in 2007 became very involved. (Killer Nashville founder) Clay (Stafford) had this incredible vision to bring everyone together, where aspiring writers could learn from established writers, established writers could get new readers and everybody could get agents and publishers. It was such a great idea and it’s been a real honor to help him bring that to fruition. I found my current agent through Killer Nashville. I was formerly president of Sisters in Crime – Middle Tennessee and am now president of the Southeast Chapter of Mystery Writers of America.

JT: I used to go to work, come home and do Killer Nashville, then write. Now I go to my mother’s every day and exercise, go to the barn (to feed all the horses), and then come home and get to work. Once I start writing, a lot of times I don’t want to quit. A lot of times I write late into the night. I’m more of a night person than a morning person. (Terrell also offers frequent writing workshops in the Nashville area as well as services on her website.)

What else would you like to say to your readers and to other writers starting out?

JT: To my readers…thank you! I hope I can continue to give you books that you like. It’s really gratifying to hear from readers who really like Jared.

To writers…Don’t give up. Keep trying to be better. It’s so easy to publish things before they’re ready. Don’t let your baby out before it’s formed or be in such a hurry to get your words out that they’re not the right words. But never give up, because if I had given up I wouldn’t have any books at all.

If you’re in the Nashville area, Terrell will talk about her book and sign copies of the book at 2 p.m. Jan. 28 at Parnassus Books.